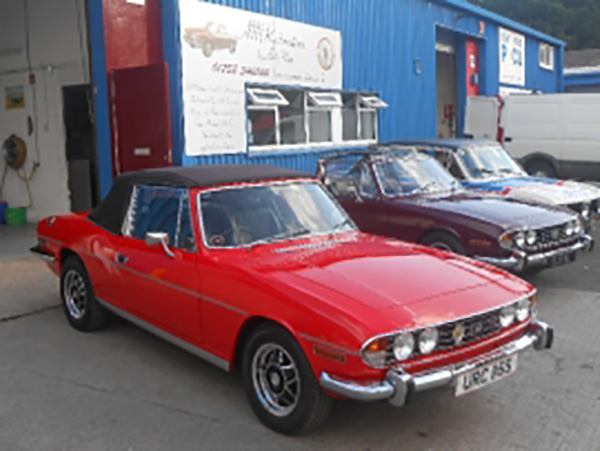 I have owned my 1977 Pimento Stag for 24 years. I moved to North Devon nearly 4 years ago and have been busy restoring a 450 year old cottage. The Stag was put in the garage and has not really been in use for 10 years, when it was last used as a wedding car. Once the garage was rebuilt I decided to put it back on the road last year. I was then faced with the decision either to sell it or have it restored. The paint was faded and showed orange peel, there was rust on both door bottoms and rear arches and lots of other minor defects. I got in touch with Andy Moss through the Stag Owners Club at the end of 2012 and by chance discovered that he had just started A.M. Restorations.

I visited Andy’s premises in February 2013 armed with photos of the defects. I was impressed with the premises and the quality of the work being carried out. We agreed a plan of work and I had already identified some extra jobs like new headlights, mirrors, under-bonnet pad, tyres, restored alloys and some mechanical work.

The Stag went in for restoration in June. At various stages Andy phones me with the other work that was thought necessary, which I could then okay. I was able to follow the restoration on the website. This was important as I live 70 miles away from A.M. Restorations.

The car was completed for A.M. Restorations first anniversary open day and was on show in the entrance. When I visited I was really delighted by the appearance of my “new” Stag. The finished car showed just how much meticulous work had gone into it. Everyone who has seen it since has been amazed at the finish of the 36 year old car.

I can whole heatedly recommend Andy and his team if you want an excellent and perfect job.

I also really appreciated being kept informed of the progress of the restoration by telephone and by the website.

I was also presented with a complete photographic record of the work carried out. Some photos I used to get the car re valued by the Stag Owners Club.